A good day with four of the team in action.

It was good to see Richard at Cosford again who brought his excellently crafted replica Fuze Aerial, apologies we didn’t take a photo of it. For those not in the ‘know’ this is a real Fuze Aerial on a missile in Switzerland at their museum. Their are four around the missile body. The fuze itself and the warhead were in the bay behind the aerials. 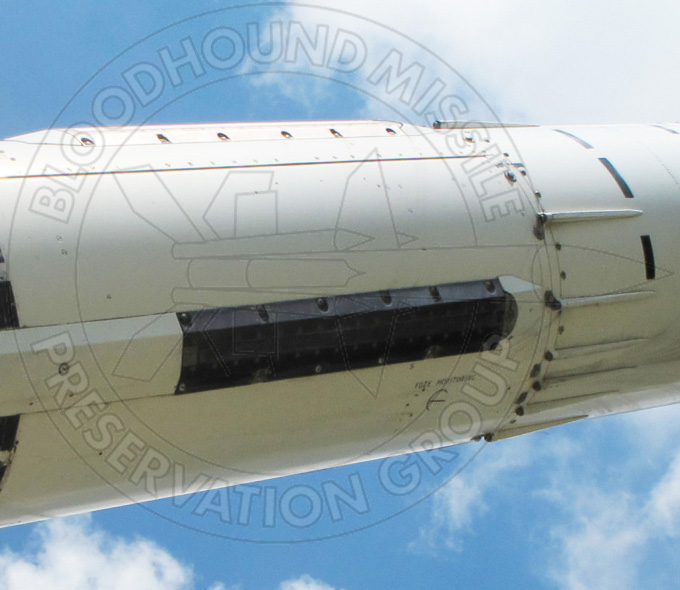 It was one of the highest security classified items so they were removed from all UK missiles prior to being scrapped hence you will not see real them on any missile in the UK except for the Aerospace Bristol exhibition that we obtained for them.  You will note that none of the display missiles had them fitted.

As a missile approached its target the radar fuze (a semi-active radar transmitter/receiver made by E.M.I. at Hayes in Middlesex) would detect the presence of a target, evaluate the probable miss distance, check for mis-triggering and, after a brief delay to maximise the probability of destroying the target,  detonate the warhead.

Here is a drawing of a Fuze Aerial

Apart from a run up check of the simulator in the LCP all the effort on Saturday was focused on the T86.

The T86 cabin is in a reasonable condition so the time consuming job of paint removal we carried out on the LCP is not required, much to everyone’s relief. That said, the T86 cabin does require a fair amount of work in preparation for a repaint and a key task was undertaken by Pete M on Saturday; rubbing down the roof and replacing ‘lost’ rivet heads. Over the many years in service and in open storage water has ingressed in and around many of the pop rivet heads used in the cabin’s construction, a particular problem on the cabin roofs. Many pop rivet heads having completely corroded away. All the rivets over two large areas of the T86 cabin roof required replacing a section of one is shown here.

A second photo shows Pete M dressed for the occasion and using an electric sander on the existing paintwork. 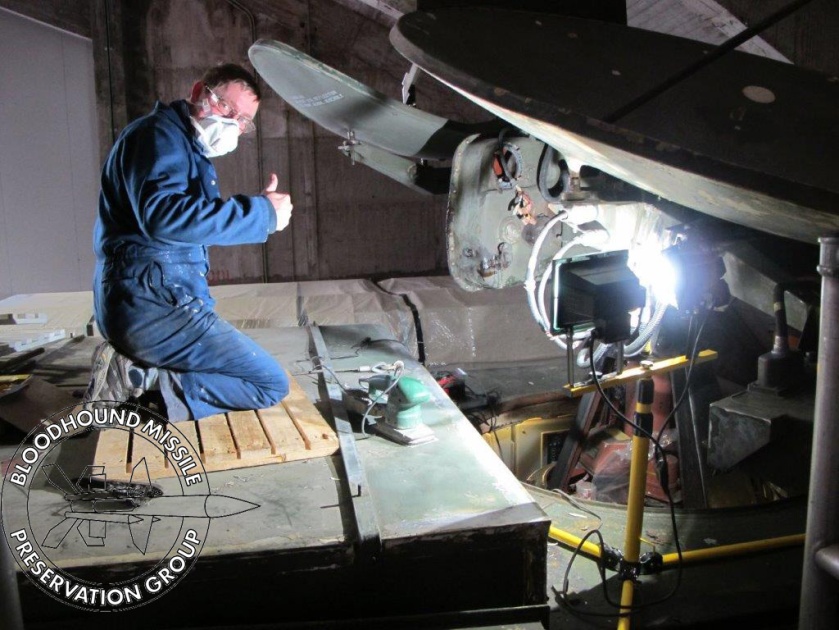 T86 Cabin Floor
Work continues on the jigsaw of plywood sections needed to cover the cabin floor. It is estimated that two more working sessions will be required before this task is complete. The plywood fitting is only the first task in restoring the cabin floor as the metal floor will need painting, the plywood treating with preservative and finally new vinyl laid.

T86 RF Receiver Cover
Richard took on the task of removing all the fittings from the aerial assembly receiver cover and also started to remove several layers of flaking paint. Due to corrosion all screws, nuts, bolts and catches will be replaced as well as the rotten fly screen that can be seen in the accompanying photo.