Absence and illness has delayed this and the next blog entry but the work goes on.

We are awaiting warmer weather so painting of the T86 can be carried out. While the LCP and T86 are under cover they are in an unheated and damp hangar which may account for the problems in running the simulator following a switch on after the cold weather.

LCP
The simulator was switched on a week ago for a test and it failed to run with a number of errors, all put down to the cold and damp. Last Saturday came a second attempt after the computer racks were warmed through with the help of a fan heater but faults remained. The first fault was in the Argus which was failing to boot the simulator and after some board swapping the memory card was found to be U/S. A spare from our Argus test rig was used and the Argus is now fully serviceable again but the Argus was not the only fault. 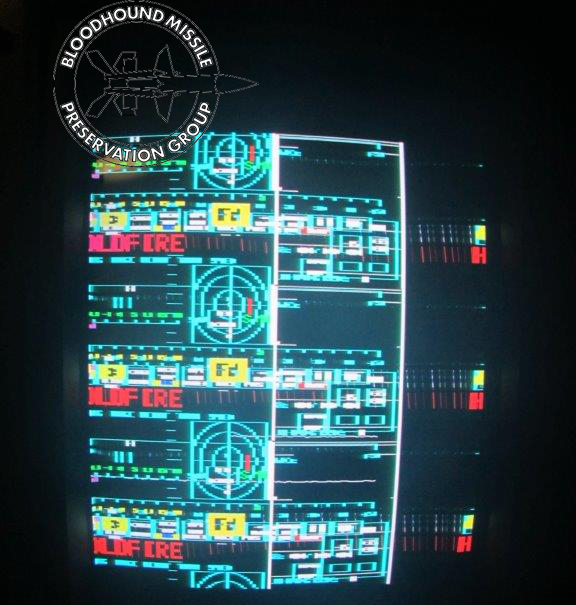 The image above shows the fault, lost sync and very pixelated. There are four CHARGE channels, one for each of the four displays, so some board swapping soon identified the faulty, a pixel store. Each display channel consists of three double euro cards, a controller and two pixel stores. We have repaired a pixel store in the past as the CHAGE display system is self-contained and driven by an 8086; not a single chip as one would expect today. In the meantime the faulty card will be replaced with a spare. [The fault previously was a defefctive SN7483A 4-Bit Full Binary Adder in a Pixel Store.]

T86 Part two of prepping the radar chassis and it was the turn of Pete M and Ian who did a great job for wire brushing corrosion and removing lose paint. Working under the radar is akin to mining as can be seen in the accompanying image. Irrespective of protective clothing it is a very dirty job but all in a good cause. Thanks go to Ian and Pete M for taking it on last Saturday.

The aerial system is a collection of waveguides and awkward corners but Neil persevered with prepping for a repaint. Further work was also carried out in smoothing the paint blisters on the Tx reflector The accompanying image shows ‘work in progress’. The aerial assembly being partly retracted for easier access to the Tx reflector.

Removing flaking paint will often uncover previous coats of paint as shown in the accompanying photo. The paint colour will be NATO green for the repaint but previous colour looks to be Bronze Green or  Olive Drab.