The construction and painting of the new T86 roof decking is nearing completion, as it is on most Saturdays! The photo below shows several main sections of the decking; one is complete with a coat of anti-slip paint on its top surfaces. The paint was chosen as it is sold for providing an anti-slip surface to such things as boat decks. 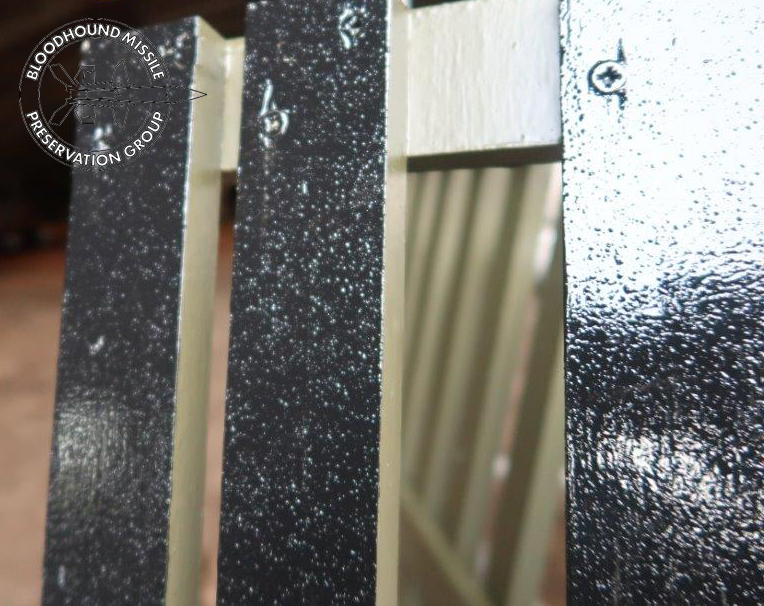 Work continues with preparing the drawers in the T86 for refurbishing. The front surfaces of the drawers has taken a hammering during its service life so will need a repaint, the colour being Dark Admiralty Grey. A navy colour in an RAF radar, what next.

The photo below shows the bottom drawer.

The partition sections had been removed during, or before, its RAF service as Yellow’s T86 at Bawdsey. It would have contained such things as the LCP Simulator and Oscilloscope Portable CT436. This ‘scope’ was made by Solartron from 1962; at least we know where there is a CT436 manual! All items were missing when the radar was acquired by us. But the top drawer did contain items from the radar’s service life …. they were including several Old Holborn tobacco tins of various fuses!

Off-site work on the T86 involved the stripping and priming of the elevation and bearing synchro covers; all are now ready for a top coat.

The bearing covers are from within the pedestal which looks to have been painted with red lead. Unfortunately this paint does not adhere to alloys so it wasn’t hard to remove more a case of it ‘just dropped off’. Red Lead is no longer available all due to the lead therein! Repainting will be carried out using correct metal primers with a top coat of red oxide paint.