When the T86 radar was recovered only one or two pieces of the original desiccator tubing remained. Over time it had perished, split and fallen off. The accompanying photo shows the refurbished top junction box cover with two new pieces of desiccator tubing fitted.

Further rubbing down of the internal cabin walls carried out in preparation for a repaint.

I thought I’d remove the rusty light switch above the main LCP door to give it a refurb. See the attached photo of the microswitch which is operated by the main LCP door. A ‘frig’ to stop the LCP lights being switched off when the door opens has been exposed!!

Away from Cosford six fans from two I/O rack trays have been refurbished. This task involves the dismantling of the fan, removing and treating corrosion, priming and repainting. When a fan is reassembled its sleeve bearing and oil reservoirs are re oiled. See the accompanying photos showing a ‘before and after’ and also the original condition of a fan blade. Refurbishing fans saves a lot of money! 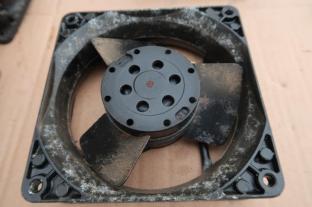 I brought home the disk tray and the dish/launcher box from the computer rack. The disk tray looks to have a problem as the LOAD and DUMP lamps are always on, they should go off after a reset. I can test the disk tray at home on the A700 rig I have. The Dish/Launcher box has a problem causing the loading down of the + and – 6V supplies in the console. Brought both items home to work on.