These photographs were kindly donated to us by  Mr Ernest Miller. They show a “Yellow River” Type 83 Bloodhound Mk1 Radar and were taken at at the test site near Leicester, about 1959. Ernerst said that the site was in the middle of the sewage farm which did tend to keep visitors away. 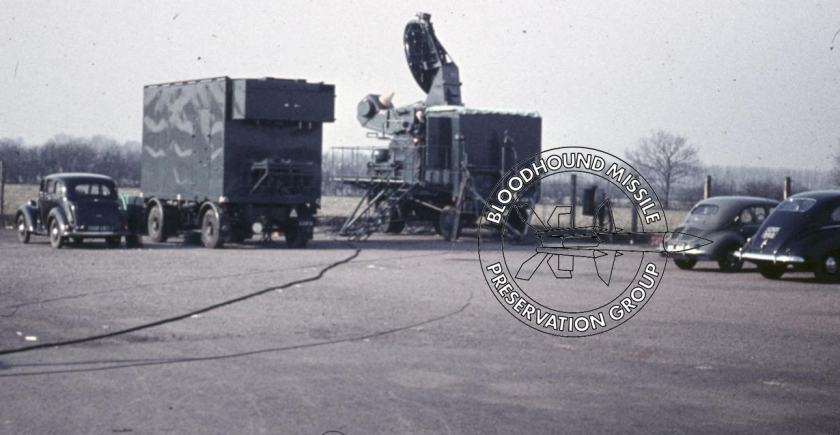 A basic drawing showing the major components can be seen here:
http://www.radarpages.co.uk/mob/bloodhound/bloodhound4.htm

A YouTube video showing the radar deployed at RAF North Coates is here:

T86
The plan is to complete all the prep work for a repaint of the T86 this summer still holds good. The work being undertaken is thorough and includes the removal of the cabin wheels and treating the chassis corrosion.

Wheel removal
Removal of the wheels from the cabin has proved to be challenging, that is until a torque multiplier was acquired, Pete M’s comment was ‘this is a dream’ following previous weeks that were spent creating all sorts of leverage systems to try and release the wheel nuts.  Here shows the torque multiplier in action.

Once the wheels are removed lose paint and corrosion is removed from the wheels, leaf springs, brake drum etc, all becoming much easier. Pete M in action on a leaf spring below.

The T86 cabin wheels are in a poor condition due to their age and the extended period the cabin has been in the open. The tyre rubber is perishing and corrosion on the wheel hubs is severe but not terminal. The accompanying image shows the inside of wheel after removal, not much paint left and a decent amount of vegetation! The T86 cabin will not be made road worthy as it does not comply with current vehicle regulations etc. but it will still need moving short distances and the perished tyres will not be suitable for that purpose in the longer term. We are therefore on the lookout for part worn 10.00 15 tyres – please anyone?

Replacing the cabin floor
Dave and Pete J have replaced the front cabin floor which can be described as a precision job. The first image shows the floor fitted before moving on to priming. To complete the new floor the lino, or a more modern version of, will be laid over the wood with metal fillets to cover joins on the wheel arches. 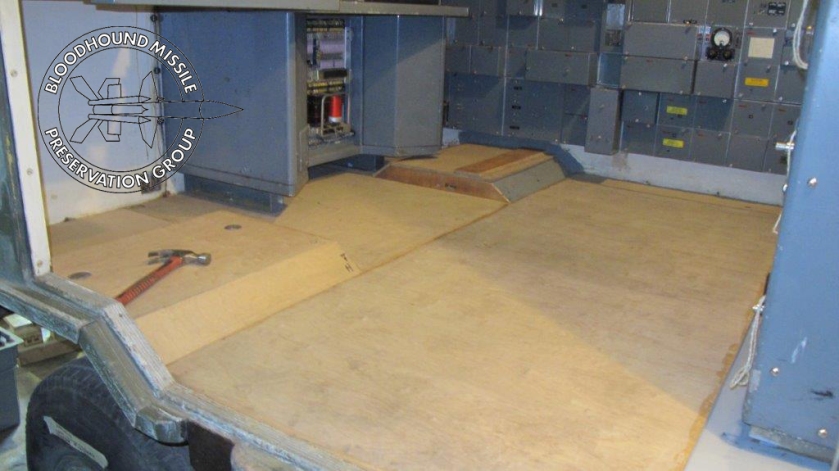 Preparing the aerial assembly
Neil continues with what looks to be a never ending task of rubbing down all the aerial system components and the rats nest of the wave guide assembly.  Here is Neil being ‘embraced’ by the aerial system!

Refurbishing components
Many of the smaller components are being refurbished off site as they are easily transported! Two accompanying images show the handles for the receiver cover and the pedestal support pillars from the rear of the cabin, before and after paint stripping.

F16 (400Hz) Power Supply
We gave the power supply a good soak test on Saturday by connecting its output to 115V incandescent bulbs; it ran for several hours without a problem. ge. At a date to be decided a test run of driving a few synchros will take place.

LCP
After several weeks of being U/S the LCP (simulator) was run up and as per last week remains serviceable with the exception of a vertical sync issue on one monitor which has been shelved to get on with other work.

As previously reported our member Pete M put in a lot of effort to develop a 400Hz power supply with the aim of running the radar simulator in the LCP. However, the large synchros proved to be too much of a load for Pete’s power supply. So Pete H thought he would have a go at resurrecting the T86’s 400Hz supply (location F16).

A note of caution, it is early days and the power supply hasn’t yet had a full load and soak test  but the attached images of meter readings show the F16 voltage and frequency output parameters. 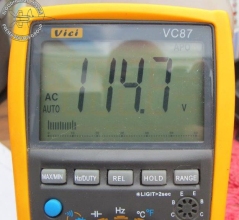 Whilst the T86 was in the care of the RAF Museum capacitors were removed by contractors who were tasked with removing any components in the T86  containing polychlorinated biphenyl (PCB) a toxic chlorine compound.  Not only did they remove those but  also all the electrolytic capacitors from the F rack power supplies!! 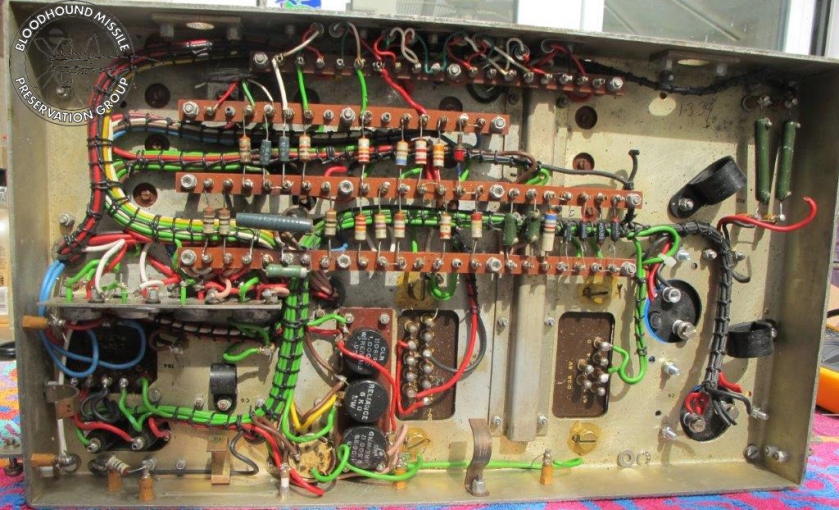 The loss of the electrolytic capacitors was no big deal as due to their age all would probably allneed replacing anyway. Several replacement capacitors are ‘near enough’ the same values of the originals, e.g. 10uf being used to replace 8uf which are not available at the correct working voltage. Here we are with the replacements fitted

For the initial switching on of the 400Hz supply we connected it to a variable auto transformer (Variac) and wound it up gradually to 230V AC. The frequency and voltage of the output can be adjusted but after several minutes the voltage dropped by 15 V. Investigation showing that the 26V DC that is supposed to be across the output of the bridge rectifier was actually 33V. The mains input had to be wound down to 190V on the auto transformer to achieve the 26V DC and at that voltage everything became stable.

These two images show the wiring of the input transformer in the power supply  and its circuit diagram. The primary windings are giving too much voltage on the secondary so we shall experiment with the links to obtain the required voltage on load.

We have noticed that the power supply gives off a fairly loud 400Hz tone. Not sure if this is normal as in a working radar it wouldn’t have been noticed!

T86
The warmer weather means working outside so one of our priorities was completed. Treating all the new plywood floor panels with preservative.

The next stage is to fix these panels to the cabin floor. All panels are secured in place by being bolted through the floor, new bolts have been procured as the originals were completely corroded and had to be cut out. The forward section of the cabin floor was also painted ready for the refitting of the wooden panels. The accompanying photo shows the repainted cabin floor, apologies for the poor quality image it will be replaced next week. 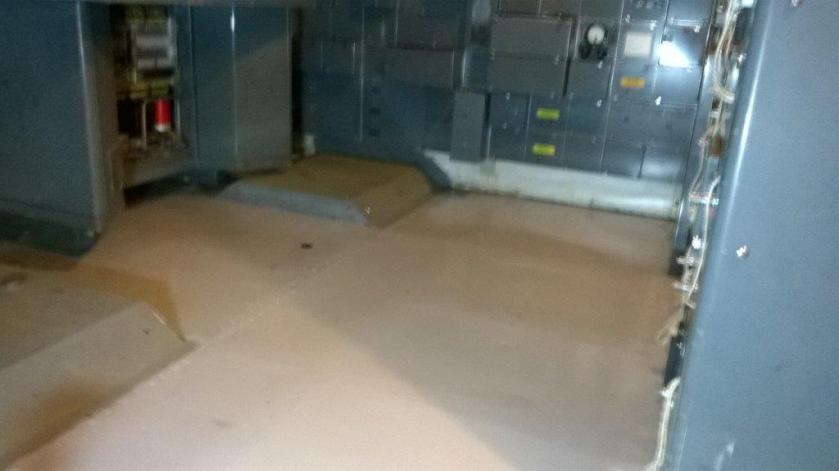 LCP
The simulator has been unserviceable for several weeks following a period of the hangar being very damp and cold, there is no heating in the hangar and we cannot leave heaters/dehumidifiers switched on when not working there.

I’m pleased to report that the simulator is now serviceable again following a replacement main GX processor in the Argus 700 computer.

One other minor issue is the Jamming Assessment display which has a vertical sync problem. The plan is to check and adjust locally and replace if necessary.