Another Saturday and another step forward in reassembling the LCP. Neil was busy with the paint brush again as we continue with the painting of the LCP roof panels prior to fitting the awning rails. I cleaned and prepared some fittings but the main task was to start refitting the door vents – photos below show the kit of parts and one of the renovated vents fitted.

Door vents now fitted and the weather proofing cover will be fitted on the next work day.

A cover for the firing lines was test fitted yesterday as seen here. 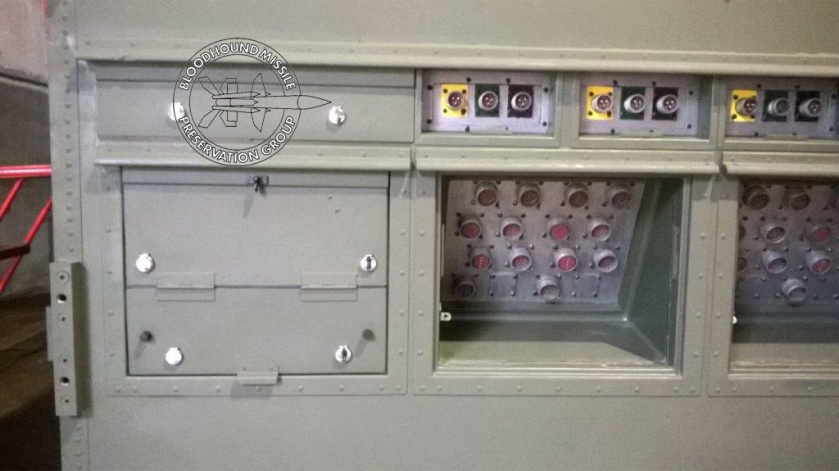 Test fitting checks the seals (do they seal?) and locking down the cover with its budget locks. The firing lines cover sealed and fitted OK but only locks down in one position, obviously some hand crafting during the original manufacture of the LCP!

Like Loading...
I have added two new short papers to our web site:
04 Semi-Active Homing – Basic Principles
05 Bloodhound Going Like a Bat Out of Hell – Distance to Become Supersonic
Find them here: http://bmpg.org.uk/bloodhound_missile_system.html
Comments will be welcomed.

Work continues on refurbishment of the LCP Cabin with Pete M completing the fitting of the 58 securing plates for the roof joins. It was a case of saving the worst till last as all the plates were originally hand fitted to rough measurements, semmingly no part drawing used here! Neil busied himself on some touch up priming of new rivet heads on the roof before a second top coat is applied. Neil was also in charge of a general sort out of our tool and consumables store. One objective was to find all the LCP cabin parts that had been put somewhere safe ‘never to be seen again’. Fortunately everything previously placed in a safe place has been found. The decision was also made to focus on completing the cabin roof section as soon as possible so that all the awning rails can be refitted.

Refurbishing the cable duct covers continued off site and are are having all the components refurbished or replaced including refurbished budget locks, new rubber bumpers, refurbished chrome covers for the budget lock key holes and new seals. 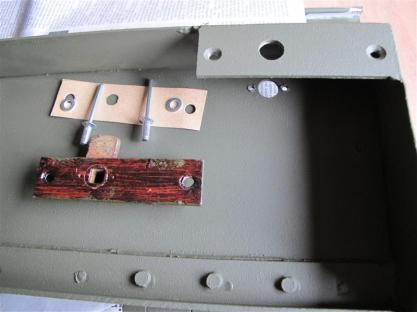 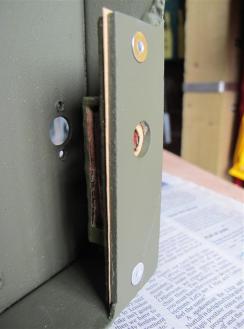 The first completed cover was refitted on Saturday., all clearly shown in this  photo below. The refitting of the cover was to check the new seals on the cover were sized correctly and then sealed the cable duct when locked down.  Everything on the cabin is being refurbished ‘as new’ from the factory. The cabin is not going to be sprayed all over as it was by the RAF the highlights like chrome covers will be left as highlights.

It may be or interest that our LCP, Serial No. 1022, is being refurbished with some parts from derelict LCP’s 1006 and 1019, these parts replacing any that were missing or broken on 1022.

Neil was back in action yesterday after organising the Iron Bridge Walking Festival and he immediately volunteered to continue fitting the securing plates for the canvas roof section covers the Pete M had started. 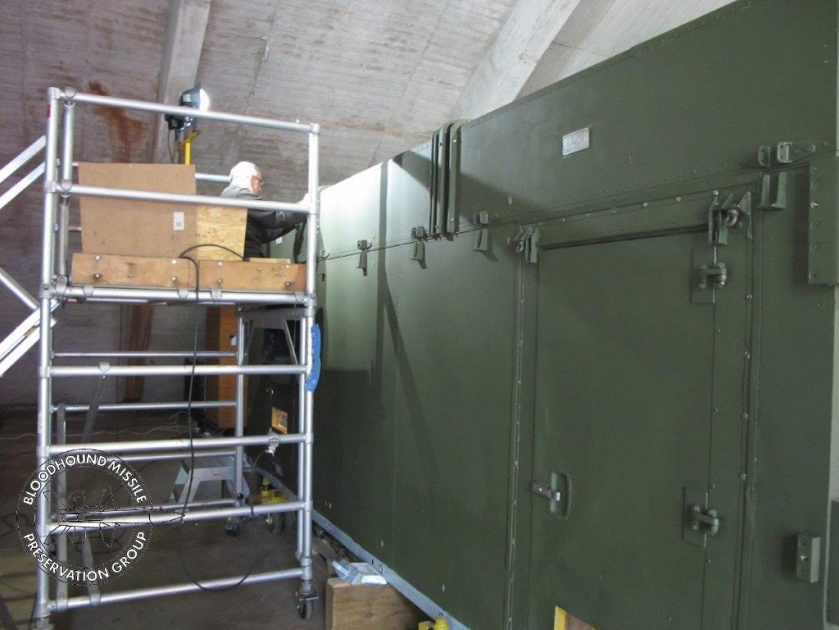 A time consuming and frustrating job of fitting and riveting 58 plates when no two plates are the same. The plates were obviously hand crafted when the LCP cabin was originally manufactured!

The twenty LCP awning frames where finally completed after they were stripped, primed and received two top coats, a job which seemed to take forever.

As the LCP is being reassembled thoughts turn to the T86. The cabin of the T86 is in much better condition that the LCP cabin so the main tasks will be refurbishing the aerial assemble and the trailer chassis for the T86 seen here.

Away from the coalface work continues with the various LCP cabin fittings. Yesterday the two LCP door vents were returned to Cosford after refurbishment which included new fly screens seen below sporting new silicone rubber seals that were generously donated and fibreglass screen material so corrosion shouldn’t be a problem in future! The original metal fly screens had disintegrated due to corrosion.

Saturday was all about painting and Dave had the best job, though he may not have thought so, painting the front wall of the cabin. The LCP is starting to look like an LCP again as seen here.

Any patches noticeable on the LCP cabin photo is where the paint is still wet. I busied myself giving the awning frames a second coat, a laborious and time consuming task. Painting is also taking place away from Cosford on the LCP cabin fittings and more information will be provided in the next couple of weeks on the refurbished cable duct covers etc. The LCP is being painted in matt NATO Green, not the IRR version of NATO Green which fades dramatically in a matter of a couple of years. NATO Green was the final in service colour of the LCP and T86.

Technical Bit
One of the first tasks in restoring the Bloodhound simulator was to refurbish ALL the Farnell G Series power supplies in the MK2A LCP, a total of fifteen. All the RIFA  (metallized paper X2) capacitors used as filters/interference suppressors have to be replaced.

I have revamped our web site and started adding technical papers. The first,  “Bloodhound  Perfomance Against Rotatry Wing Targets”, is at:
http://www.bmpg.org.uk/Bloodhound_&_Helicopters.html